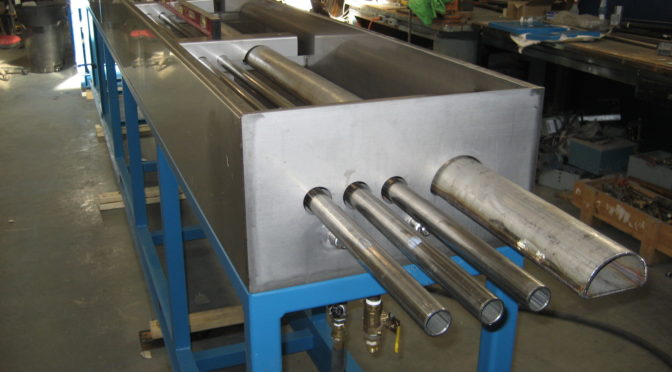 Annealing occurs by the diffusion of atoms within a solid material, so that the material progresses towards its equilibrium state. Heat increases the rate of diffusion by providing the energy needed to break bonds. The movement of atoms has the effect of redistributing and eradicating the dislocations in metals and (to a lesser extent) in ceramics. This alteration to existing dislocations allows a metal object to deform more easily, increasing its ductility.

Specifically, Annealing of glass is a process of slowly cooling hot glass objects after they have been formed, to relieve residual internal stresses introduced during manufacture. Especially for smaller, simpler objects, annealing may be incidental to the process of manufacture, but in larger or more complex products it commonly demands a special process of annealing in a temperature-controlled kiln known as a lehr. Annealing of glass is critical to its durability. Glass that has not been properly annealed retains thermal stresses caused by quenching, which indefinitely decrease the strength and reliability of the product. Inadequately annealed glass is likely to crack or shatter when subjected to relatively small temperature changes or to mechanical shock or stress. It even may fail spontaneously.

To anneal glass it is necessary to heat it to its annealing temperature, at which its viscosity, η, drops to 1013 Poise (“Poise” is a measure of absolute viscosity; 1 poise = 1 dyne-second/cm²). For most kinds of glass this annealing temperature is in the range of 850–900 °F (454 – 482 °C), and is the so-called stress-relief point or annealing point of the glass. At such a viscosity the glass still is too hard for significant external deformation without breaking, but it is soft enough to relax internal strains by microscopic flow in response to the intense stresses they introduce internally. The piece then heat-soaks until its temperature is even throughout and the stress relaxation is adequate. The time necessary for this step varies depending on the type of glass and its maximum thickness. The glass then is permitted to cool at a predetermined rate until its temperature passes the strain point (η = 1014.5 Poise), below which even microscopic internal flow effectively stops and annealing stops with it. It then is safe to cool the product to room temperature at a rate limited by the heat capacity, thickness, thermal conductivity, and thermal expansion coefficient of the glass. After annealing is complete the material can be cut to size, drilled, or polished without risk of its internal stresses shattering it.

At the annealing point (η = 1013 Poise) stresses relax within several minutes, while at the strain point (η = 1014.5 Poise) stresses relax within several hours.[2] Stresses acquired at temperatures above the strain point, and not relaxed by annealing, remain in the glass indefinitely and may cause either short-term or much delayed failure. Stresses resulting from cooling too rapidly below the strain point largely are considered temporary, although they may be adequate to promote short-term failure.

The relief of internal stresses is a thermodynamically spontaneous process; however, at room temperatures, it is a very slow process. The high temperatures at which annealing occurs serve to accelerate this process.

The 200 Series line of continuous strand annealers are available in three temperature ranges including; LTSA 1000°C (1850°F), SA 1200°C (2200°F) and HTSA 1700°C (3100°F). The furnaces are available with up to twenty process tubes each with individual atmosphere control. Atmosphere options include air, nitrogen, argon, hydrogen or dissociated ammonia. Various heated lengths with single or multiple zone control are available, as well as cooling sections and optional features for specific applications. These continuous annealers are available for wire, rod, cable and other strip materials.